It had been another frantic Sunday morning.

If I had lain the children’s clothes out the night before, we wouldn’t have had battles over mismatching clothes.

If I had trained my kids better about putting shoes away in their shoe bins, we wouldn’t have spent 20 minutes franticly looking under couches and in toy chests for them.

If I had a better chore system, my daughter would automatically do her breakfast chore without mommy asking 16 times.

If I had gotten up earlier, I would have had Bible time with the kids at the breakfast table instead of barking at them to eat faster so we could leave.

If I were calmer, gentler, maybe there wouldn’t be so much bickering and complaining in the car while we drove downtown to church.

If I were a more organized person, my purse wouldn’t be so heavy with all the junk that’s accumulated in it…in addition to lugging a chunky baby in a car seat carrier.

And we’re just rolling in to church, and I’m exhausted. The adrenaline rush to get us out the door is starting to crash, and we file into our seats. And all the kids are fidgety. And Katy-Grace is “hungry again”. (We just ate breakfast!) Daniel Josiah took five bagels off the refreshments table on our way into the sanctuary. (I’m telling you, we JUST ate breakfast!) Malachi needs a diaper change (I JUST changed it, before we left), and all I want to do is sing some songs to Jesus and not have to deal with anyone else’s problem for at least 20 minutes…

Then the whimpering starts…

“Mommy! Mommy! My tag is itching me.”

Honey, I can’t do anything about that right now.

“But, moooommmy, it really itches. Can you cut it off?”

Lord, I know I’m failing miserably at everything…and if I could just get my act together and get more organized, things wouldn’t be so hard. But Lord, you’re going to have to handle this problem. I give it to you. I have nothing left.

“Mommy, can’t you get some scissors and just cut it off…it reeeeaaaalllly iiiiiiiitches…”

Honey, you’re just going to have to deal with it.

We’re already halfway through the worship time, and I’m fishing through my bag to find Malachi’s diaper so I can slip out and change it.

And then I feel them.

I had thrown then in there earlier in the week to wrap a gift for someone at.stoplights.on.my.way.across.town

because, again, I didn’t have my act together, and was doing it on the fly.

I quickly pulled them out and snipped the tag off. Thus relieving me of an entire-worship-service-long whining session.

Thank you, Lord, Thank you!!

I whisper to Him.

And He did some whispering back:

If you had had your “act” together like you envision and expect for yourself, I couldn’t show up in such intimate ways. You wouldn’t need Me.

I take the entirety of your messy life, and use every part. Even un-cleaned-out purses and lost shoes and whining children.

Bring me itchy tags, and disorganized purses, and frantic mornings, and let me bear them.  I have creative ways of carrying them, while you carry my easy yoke and light burden.

The “extra luggage” that you think is so cumbersome now, might be your answer to prayer later.

Faith as small as a mustard seed…as small as itchy tags, can move mountains. Just watch.” 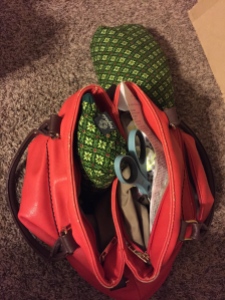 The crazy full, and unorganized purse. All part of God’s plan.

I will answer them before they even call to me. While they are still talking about their needs, I will go ahead and answer their prayers!