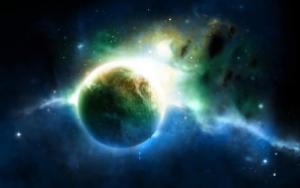 I read it again, just as I did at this time last year. Beginning a new Bible reading plan, in hopes that THIS year there won’t be quite so many gaps in my completion of it.

Last year I had begun the year with high hopes and simple and tangible goals. A week later I had found out I was pregnant…which rendered me almost useless as an emerging being sucked every ounce of strength, energy and sanity out of me. There went the new years resolutions….again.

But I’m thankful that those words still stand there. 2014 was a whirlwind, at times feeling like a tidal wave the at I could hardly get my breath from, but still those words stand. Even when I have doubted, and sunk, and emerged again.  There is still a new beginning.

My new beginnings start with HIM.

“In the beginning, God CREATED.”

And in my new beginnings, I believe that HE will CREATE.

And in this home that is so chaotic, and messy, and full and loud….the one that sounds much like the formless and void and dark earth that God transformed into the highly intricate and orderly universe,

I ask Him to hover.

Just as it says he did in the beginning, the Spirit hovering over the waters. And as I invite Him to hover, I ask Him to move in and begin creating order…giving each thing a place, a boundary, and each activity a season, and would He cause life to flourish within those boundaries-just as He caused living creature to flourish in the expanse of air, and land animals to roam?

I  beg Him for new beginnings.  Bring order to this chaos! Bring loving spirits instead of bickering! Remind my kids to clean up after themselves! Give me a workable system! Proper boundaries and places for things, just as you did over the formless void!

But maybe…just maybe, the boundaries and seasons and order I crave in my physical house, are reflections of a craving for order in my heart. For inside this chaotic heart I have forsaken rhythms, and seasons and order. Instead, I have sought to play the creator….without the Creator.

And nothing is left but disorder.

And without the hiding away IN HIM, who begins, and hovers, and speaks and creates, I have no capabilities to do so.

I will only create to the degree that I allow the Creator to take up residency here in the home of my heart one.nanosecond.at.a.time.

And I believe, and have confidence that His Creativity, His order, His seasons, and rhythms, and His boundaries will flow through me to help create the same in my home, and in my children, and in my relationship with my husband.

In this new beginning, 2015, may God create the order I crave…found only in letting the Creator have full access to this life, this family, this home.

After all, He is the one who takes the formless and void and brings order out of it.

In the beginning God created the heavens and the earth. 2 Now the earth was formlessand empty, darkness was over the surface of the deep, and the Spirit of God was hovering over the waters.

6 And God said, “Let there be a vault between the waters to separate water from water.”7 So God made the vault and separated the water under the vault from the water above it. And it was so. 8 God called the vault “sky.” And there was evening, and there was morning—the second day.

9 And God said, “Let the water under the sky be gathered to one place, and let dry groundappear.” And it was so. 10 God called the dry ground “land,” and the gathered watershe called “seas.” And God saw that it was good.

20 And God said, “Let the water teem with living creatures, and let birds fly above the earth across the vault of the sky.” 21 So God created the great creatures of the sea and every living thing with which the water teems and that moves about in it, according to their kinds, and every winged bird according to its kind. And God saw that it was good. 22 God blessed them and said, “Be fruitful and increase in number and fill the water in the seas, and let the birds increase on the earth.” 23 And there was evening, and there was morning—the fifth day.

24 And God said, “Let the land produce living creatures according to their kinds: the livestock, the creatures that move along the ground, and the wild animals, each according to its kind.” And it was so. 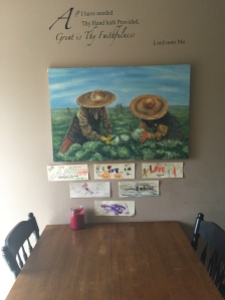 Posted by the breakfast table, so we can remember to pray them into our lives each morning.