It had been a frazzling day. (Come to think of it, every day is a frazzling one with six kids).
That Sunday we had ushered those six kids out the door early in the morning to attend worship at our “sending church”. We had scooted downtown to attend an event at the sight of the new after school program starting up, stopped by the house we are renovating, and were headed to the evening service of the church where Danny is interning for the year. As we rounded the corner, we spotted Mike, one of our future neighbors  walking down the street. I quick rolled down the window, had Danny pull over and called out to him, “Mike! Hop in, we’re headed to church!”

He hopped in, told us about how he had wanted to go to church that morning but had overslept, and it was perfect timing that we had seen him as he walked to the grocery store.

We sat in worship, and I struggled to stay focused at times, when my days are so full and flustered, it’s difficult to keep my brain from being so as well. My mind wanders…..
I feel so weak. I feel like I’m running on fumes. I feel like six kids fills up  every single moment of every single twenty-four hour time segment.

And we are suppose to be starting a church soon.

The last time we worked on starting a church, we were ten years younger. That was six kids and a whole lot less responsibility ago. We were full of energy, drive, eternal optimism, and naïveté. We ran programs, put together outreaches, offered hospitality and loved on a lot of people. We poured every waking (and sometimes,even non-waking) moment into ministering to those God had placed in our lives in Newark. 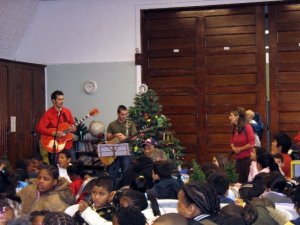 Christmas outreach at the church plant in Newark. Daniel Josiah could still be toted around in a back pack carrier….six kids won’t fit on my back anymore…

Now we are suppose to be starting a church and we are older, more tired. Not tired of Kingdom work, but tired from getting up 3-4 times a night with whichever kids is sick, having bad dreams, or wets the bed. Six kids with a range of needs-sports schedules and nursing schedules, school projects and potty training endeavors, social commitments and diaper changes…its a full time job….for three people. I used to run from one massive outreach to another and now I run to one crisis mess after another. The time between each , I mean, kitchen explosion is a mere three hours…on a good day.  I have so little left to give after tending to half a dozen kids day in and day out. How are we going to have the energy to pour ourselves out like we did last time? How is Danny going to be able to lead us all in this endeavor when he’s currently half-crippled with a shoulder that is still 6-10 months away from full recovery? How are we going to battle the sin and disfunction in our new community, when the sin and disfunction already runs deep…in our own home, in my own heart? 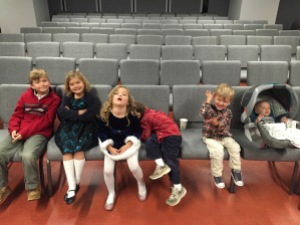 We filed out of our rows to go up to receive communion. I partake in faith. A weak one.

I slumped back into my seat, head bent over, laying it all out to a Jesus who sometime feels far.

I feel a strong arm squeeze my shoulder and pat me on the back.

I look up to see Mike’s dark skin in contrast to the pale walls. 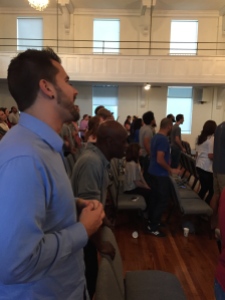 He gets that this is hard. He sat in that car and heard all the fires I put out concerning children’s needs in just the 15 minutes that we drove across town.

Mike has his own set of struggles and hardships. And I have mine. And did we not just eat of the same table? The one that represents the Bread of Heaven that has promised to satisfy hungry souls?

When we moved to Newark, I knew I “had” the bread and my job was to hand it out to everyone. Now, I’m just as starving for it as our soon-to-be new neighbors who know street life and struggle far better than I.

We are moving into this mission as common beggars toward the same God. How different from the “I’ve come to bring you the Savior ” mentality I had as we entered the ministry in Newark ten years ago. Now, I’ve got a “I’m desperately clinging to the Savior. You want to help each other along on the journey?” mentality.

I needed that squeeze on the shoulder from Mike every bit as much as he needed a ride to church. We’re in the same boat, him and me. And maybe our presence in each other’s lives will be the very thing that keeps us looking out on the water towards the One who walks on it, instead of looking at the waves that threaten to crush us under it.

It’s a weak place to be…just barely catching one’s breath in between the rolling waves of raising six children.  But a perfect place for our Savior to walk through.

So my only prayer, our only hope, is that He shows up in the weak place again. The weak, but available place of my heart, and our marriage, and this home, and that neighborhood that He’s called us to move into.

So we move. Move forward in weakness.

But there’s that promise about weakness.

A promise that HIS power is made perfect there.

So we go. with weakness, yes, but with availability, and expectation that somehow God’s spoken word will truly create an image of His power being perfected…not just despite the weakness….

But he said to me,

“My grace is sufficient for you, for my power is made perfect in weakness.”

Therefore I will boast all the more gladly about my weaknesses,

so that Christ’s power may rest on me.